With spring officially here, pansies (Viola x wittrockiana) can be found growing in gardens nearly everywhere. And it’s easy to see why the cool-season flowers are so popular. Not only do the cheerful blossoms add old-fashioned charm to garden beds and containers, such as our Hula Planters. But the unsprayed pansy petals are also edible and can be added to your spring meals and drinks.

Pansies are versatile plants. Whether the flowers are single colored, blotched or streaked, pansies come in an amazing array of hues from the mauve and white shown above, to red, blue, purple and even orange. The above pansies are growing near mixed romaine lettuces for future salads, as well as with the low-growing sweet alyssum, which is also edible.

Pansies grow best in full to partial sun, when temperatures stay between 40 degrees F. at night and 60 degrees F. during the day. This makes them ideal for spring gardens, as well as fall and mild winter gardens.

These cool-season plants are biennials and often grown as annuals. In warmer zones, you can even grow this flower as a short-lived perennial.

Plant your pansies in moist, well-drained soil. We’ve planted our pansies with Empire Builder, which is our grower’s mix rich in worm castings, alfalfa meal and other organic matter such as sea bird and bat guano.

Over the growing season, remove faded or dead blossoms on your pansies to stimulate more flowering. With morning sun and afternoon shade, your pansies may last longer into the season.

If you’re going to eat pansies, it’s important to know the flowers have never been sprayed. When you buy transplants from garden centers, ask if the flowers were grown for edible purposes. Often nurseries spray their bedding plants with systemic pesticides that were not intended for human consumption.

You may want to grow pansies from seeds for edible flowers. Sow pansy seeds 6 to 8 weeks indoors before transplanting them, and allow your plants time to acclimate themselves to outdoor growing conditions. Here are more seed sowing tips from the Utah State University Cooperative Extension.

Also, you can eat pansies that have re-seeded themselves in the garden – if they haven’t been sprayed. Always know what you are eating, and never eat anything you aren’t 100 percent sure is edible.

Your farmer’s market or local food shop may sell edible pansy flowers too.

Pansies have a mild evergreen flavor that lends itself well to salads, drinks and desserts. Unlike many edible flowers, you can eat the entire pansy flower – sepals and all. But in this salad, only the pansy petals were used. 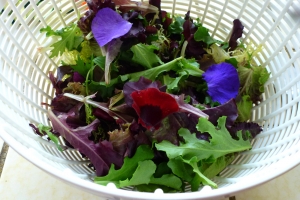 Experiment with Pansies in Kitchen

Surprise yourself with your culinary creativity. Float pansy flowers in punches. Or, freeze petals in ice cube trays to add pops of colors to cocktails and sparkling waters. Pansy flowers lend themselves well to candying, and can be used for decorating cupcakes, cookies and cakes.