All About Earthworms – Introduction

Previous Next
All About Earthworms – Introduction

Probably one of the most easily recognized invertebrates, earthworms are of the phylum Annelida, meaning “ringed” and refers to a series of segments that make up their bodies. Varying from all brown to a pinkish colour and lengths from a few millimeters to 300mm (1ft) in some species but are usually up to 100mm (4in).

Eisenia fetida (older spelling: foetida), known under various common names such as redworm, brandling worm, panfish worm, trout worm, tiger worm and red wiggler worm, red californian earth worm, is a species of earthworm adapted to decaying organic material. These worms thrive in rotting vegetation, compost, and manure; they are epigean. They are rarely found in soil, instead preferring conditions that are inimical to some other worms. In this trait they resemble the Lumbricus rubellus.

Eisenia fetida worms are used for vermicomposting. They are native to Europe, but have been introduced (both intentionally and unintentionally) to every other continent except Antarctica, occasionally threatening native species. – Wikipedia 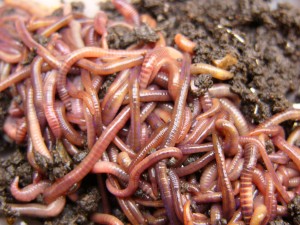 Lumbricus terrestris is a common species found over most of the world, belonging to the family Lumbricidae which has about 220 species. They burrow through the soil ingesting decaying vegetative matter as they go, excreting a mixture of soil particles and undigested organic matter sometimes seen as “casts” at the burrow entrances. They perform a vital role in agriculture by aerating the soil and moving nutrients to the surface. Where conditions allow they live for up to six years and can attain densities of 150,000 per cubic meter (1.3 Cu yd) of vegetative matter. L. terrestris was apparently introduced into North America by early European settlers. – Wikipedia