Probably everyone has been bullied at some point in their life. Usually the physical stuff is preceded by some kind of name-calling meant to make you seem wimpy or freakish. Imagine being called a sap; someone dull and easily duped. Then imagine being called a sucker on top of that; someone duped more than once. Now imagine being called yellow-bellied, which adds scared, cowardly or “chicken”. This is the uncomplimentary combination of names unbecoming a handsome and unassuming Woodpecker that actually comes in a variety of colorful suits. 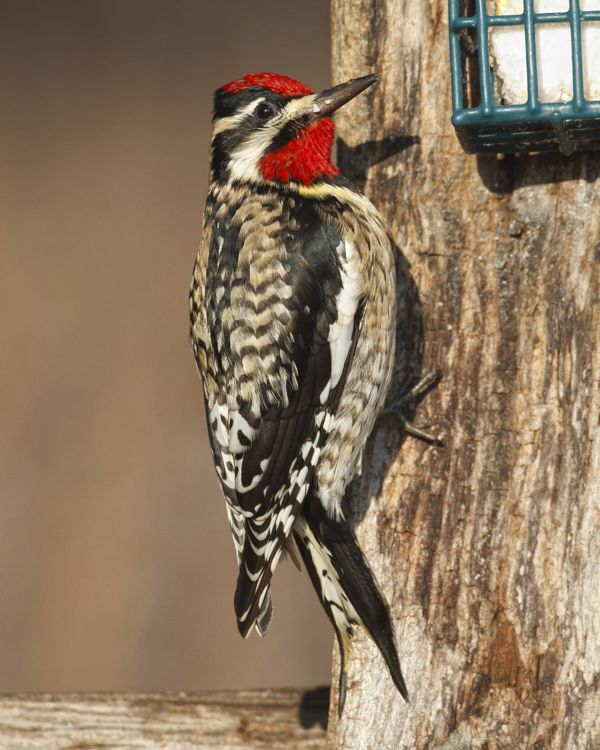 Back in Iowa, we had the Yellow-Bellied Sapsucker that looked something like the more common Downy Woodpecker, which is a junior version of the Hairy Woodpecker. All of them have some red in the head, but are otherwise black and white patterned, with the Yellow-Bellied Sapsucker indeed having a washed-yellow belly. Why so many near look-alikes are needed is beyond me, but all are welcome. Out west there was a “red race” I had not seen, with an all-red head, but called the Red-Breasted Sapsucker, and the two were said to be the same species. I eagerly anticipated someday seeing that evidently strikingly beautiful red-headed race, which couldn’t be called that because we already had the totally different Red-Headed Woodpecker and we have enough trouble keeping the descriptive names of these Woodpeckers straight. Eventually, I got to see the Red-Breasted Sapsucker when I went out to California in my college days to work summers for the Forest Service. I wasn’t disappointed in its exotic beauty. That name “sapsucker” invites ridicule and you feel a bit sheepish even saying it in mixed company. The only thing that sounds more revolting is “goat-sucker”, a class name given the Whip-Poor-Will, Nighthawk and kin. Where did the Sapsucker name come from? Well, unlike other Woodpeckers, these birds go around pecking holes in live trees to induce them to weep sap. Other self-respecting Woodpeckers peck on dead trees or limbs in search of hidden or boring insects. Then the Sapsuckers come back later to eat or suck up the collected sap, along with any insects that have been attracted to it. Clever.  I believe Hummingbirds will also frequent the Sapsucker holes looking for easy meals. So the name, Sapsucker, has a basis in the bird’s real behavior. But the distinctive thing about these Sapsucker holes is that they are pecked in regular pattern along horizontal lines spaced at regular vertical distances apart. The distances apart correspond roughly to the length of the bird’s body. They evidently peck across left to right, or maybe right to left, as far as they can reach, then move up (or maybe it’s down?) one body-length unit and peck the next line. Woodpeckers are unique in having two toes placed forward and two backwards to enable them to cling to tree trunks, and their tails are specially designed as props to hold them in place. Works pretty slick. Sapsuckers have preferred trees that they peck and can fairly riddle a tree trunk, which usually does not do serious harm. But, if they peck at a particular spot enough, encircling the trunk, they conceivably could kill a tree, and we saw that almost happen to a birch tree in our front yard until I wrapped over the sore spot and the sapsuckers moved on. Most people mistake those lines of holes for insect damage, but in general it’s nothing to get alarmed about. This has been going on for millennia. They’ve done it again. Now there are three Sapsucker species (in addition to Williamson’s, evidently distinct) where there once was only the Yellow-Bellied. Now, without the birds even knowing it, they’ve been split into the Yellow-Bellied, the Red-Breasted, and the Red-Naped. Each looks quite different, but there are all sorts of gradations between them. All three have yellow bellies. Likely I’ve seen all three, but I’m not sure, so I don’t know whether to add or subtract from my life list. Oh well, I’ve lost count anyway. We have the Red-Breasted Sapsuckers here at Black Lake. They come and go and usually announce their presence with a unique “yerk”, or mewing sound that always comes as a pleasant greeting to me, although I know it’s meant for another of their own kind. And where the three kinds overlap in range, who knows what kind of communication clamor that sets off. The Red Breasted truly is a smashing beauty of improbable presence. You can’t quite get over its gracing your presence. But then that beauty and graciousness goes away at five in the morning when it starts hammering at the metal base of our yard light fixture, just to announce its presence and for something to do. There’s no sap flowing there; move on, bird.