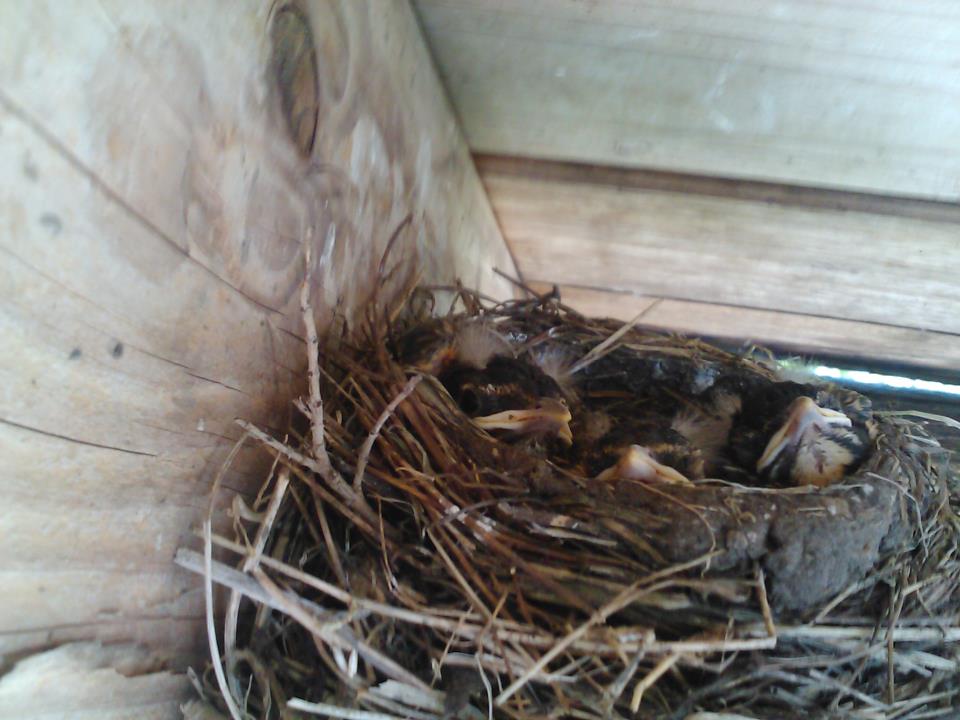 What is it that’s so magical about 4:30 in the morning? I don’t sleep well. I’m awake or up a number of times during the night for a variety of reasons. Lately I’ve been awake at 4:30 and I hear the robins and other birds start to sing loudly at that time, and it goes on for perhaps half an hour. They do this every morning, rain or shine, except probably not in winter.

I first noticed this phenomenon when I was a kid around twelve, living at 848 S.E. Gratis in Des Moines, Iowa. One summer day or evening my brother and I decided to sleep outside on the parking strip in our sleeping bags. Back then the road was gravel. The next morning, just as it was getting light, we were awake, or maybe awakened, and noticed the birds were all singing at the top of their lungs, as if to greet the new day.

It was a magical moment and a beautiful morning that has always stuck in my mind. I realized, too, that this was like a clockless alarm that went off automatically at 4:30. In fact, on different occasions and in different places around the world, as I grew up, I noted this magical phenomenon occurring at 4:30. I later came to hear it described as the twilight concert. It has to do with the sun dawning. Twilight is an “in-between light” time, also known as daybreak. We may fail to welcome the new day, but the birds don’t; they know what’s meaningful and how to be thankful for the gift of another day; even though they know it’s a sure thing. Or is it?

Why do birds sing upon rising, before going out for breakfast? Scientifically, there’s no good reason for it. Scientifically, we know that only two things matter to mere animals, eating and reproducing. What need would they have for useless joy or for playing?

What is this powerful and universal force in every individual of every form of life to want to stay alive? What is it that’s so innately rewarding about wanting to be alive and free to warrant the struggle? What, after all, does a microbe swimming in a mud puddle get out of being alive that it will fight and exert itself mightily to keep from being captured and eaten by a bigger microbe? Do microbes go to microbe heaven? Nothing, except perhaps some people, is indifferent to dying. Is the motivation for going on simply to experience going on?

Back to the birds, and maybe this is the alert: we have a nest full of baby robins above the porch just outside the front door at BLO. Come quick if you want to see them. For the past few years the robin parents have chosen this spot so close to people activity to build their nest. And they build it so quickly. Suddenly there’s eggs (a beautiful blue, for who knows why) and then the young. Do you suppose the mother robin names her kids? To get a glimpse of the baby robins in their nest, you can go to Find Black Lake Organic on Facebook.

The young clamor to be fed, and the parents will risk their own lives to keep them fed and reared. And then they are gone – – – until next year. It’s that coming back, year after year, that’s so affirming and so assuring. In the face of that perennial and primal urge, who are we to not go on?

The dawn serenade, dawn rhapsody, or twilight concert, is a transfixing thing. You can’t ignore it. What’s so amazing is that among all the different kinds of birds sounding off, few of them are really melodious. Yet, when you put all these discordant, if insistent, sounds together, you have a sweet symphony. So sweet and stimulating is it that it may actually be a necessity for the prolonging of life in that it is speculated that plants of all kinds are especially induced to grow by certain harmonious sounds. And, in nature, you can’t get any more harmonious than the twilight concert. For that matter, what is it that’s so transporting about a beautiful human voice in song?

We have a CD (a sort of new-fangled record) titled Dawn at Trout Lake. I’m almost certain that it was recorded at the very Trout Lake where Suzanne and I went “camping” in the summer for several years. I can identify many of the birds heard on the CD. We’ve been there before and I think I know precisely where the recorder must have been sitting; where marsh, forest and field come together. It’s a magnificent spot, with snowy Mount Adams looming in the background and mirroring on Trout Lake’s placid waters. We have precious memories of those times and must go back. Go there with reverence.

There are experiments on the effects of various sounds on plant growth. Some of them used lie detectors hooked up to the plants. The human voice and classical music measure favorably in plant response, but they hate heavy metal rock. There’s a message in there. There’s a chapter titled “Sonic Bloom” in the 1989 book Secrets of the Soil, by Tompkins and Bird, where you can read about some of this experimentation. Secrets of the Soil is a combination of the fascinating and the wacky, so watch out. In actuality, it is a stealth book about Bio-Dynamics masquerading as the true organics, and bends nearly everything to establish that point. Sometimes bending becomes distortion.

Never mind. The point is, you need, every so often, to get up around 4:00 AM and start listening and watching. If it is a clear day (or twilight), hear the birds, watch the sun come up. It is sure to be memorable and more than worthwhile. GLK